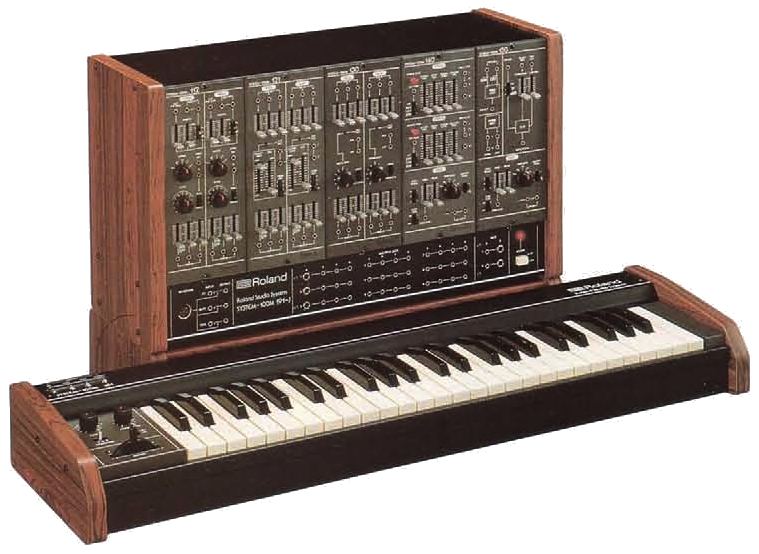 The System-100M was a small modular synthesiser released by Roland in 1979 through to 1983, not to be confused with their earlier semi-modular System-100.

Judging by contemporary brochures, it seems to have somewhat been designed to work with the MC-4 MicroComposer, by connecting the MC-4's four CV outputs to two pairs of 100M oscillators.

As you might expect from the era, its format is smaller than Moog's, and bigger than the later Eurorack standard. It's unique to this system, so there's no cheeky slipping a few modules into a different system's case. Most of the modules perform double or even triple duty. It's pretty economical with space.

I've only used Behringer's clone, so can't comment on the original's sound or stability, but the layout is fantastically convenient. Just as the System-700 is a refinement of Moog's 900 series, the System-100M refines the layout even further, in addition to shrinking it down to a more manageable size.

For example, the 121's filters and 130's VCAs alike have three-input mixers for both the audio and CV inputs. The 132's least used mixer channels default to having convenient steady positive and negative voltages for you to attenuate and send, making each mixer double up as a handy CV source, in addition to the 132 already having separate CV sources anyway. All these details add up to let you easily route together a fairly complex patch with the minimum of wires and fuss. This user interface was very well designed.

There are few omissions. A voltage controlled, even resonant, highpass filter would have been nice. Perhaps a sub-oscillator like on the similarly grey and sliderful SH-101, although the dual oscillators admittedly would make it somewhat redundant.

Overall, you could do far worse than using a System-100M as the main or even sole source of sounds in your studio.

On the single "Angel Face" that I did for Shock, I played all the instruments myself, and that's the way a lot of electro-music is going. In fact, everything was done on the MicroComposer, and I only used the SDS5 Drum Synth, the SDS3, and the Roland System-100M with it. The 100M for me is one of the best synthesisers on the market, with so many control functions available independently, whereas most synths only have one or two LFOs to do all the modulating.

The System-100M is useful for discovering unique sounds.

The Roland System-100M is an almost ideal introduction to the world of modular synthesis. It can be hard work at times, not to mention a little frustrating, but your reward will be sounds that are far more complex and satisfying than your average mono-synth can produce, and some of these sounds may indeed be unique to you.

...experience has taught us to keep the tape running if something good is happening — the Roland 100M in particular is a bit unstable. Sometimes I switch it off with one sound patch into it at night, turn it on the following morning, and it sounds completely different!

There are things I can do with it that are so frighteningly good, especially now that I have a MIDI to CV interface for it. I'm still amazed at its power. For example, the flexibility of the system allows me to get the most brilliant oscillator sync sound. This is done by syncing both VCOs to fight against each other, and then let them also frequency modulate each other. The sound that produces is superb, but it's only monophonic, so I then sample and loop it. Suddenly I have an analogue polyphonic sound which nobody's ever heard before! It really is astonishing!

Obviously, it starts with an oscillator and an amplifier, and if you want to alter it, you put it through a filter. Ignoring the rules beyond that means ignoring the boundaries. The best thing about it is that it's modular and it uses a patchbay, so you can send things back on themselves and get, like, analogue feedback, you really can... You can do cross-modulation, too. It's pretty good for external sound sources, as well. You can stick anything through the noise, and the filters... We've got two CV gates for it, so we can synchronise it like MIDI. It's primitive, but it's a way of controlling it.

Summing up, I have to say that I find the Roland 100M to be as versatile, expandable and affordable a system as you can get without going the DIY route.

This is one of the neatest modular systems ever designed. Not as versatile or open to experiment as a Serge, or even a Digisound; but beautifully designed and engineered, reliable, and neat and good sounding. The filters beat most other late 70s Roland gear, and there's the right mix of accuracy and analogue imperfection to give you a reliable but human sound. It packs a lot into a very small space.