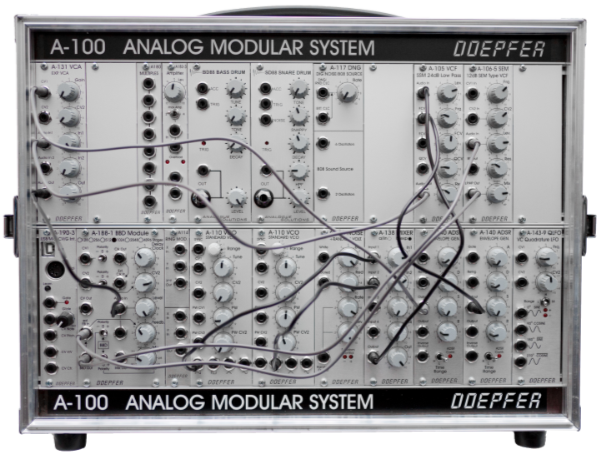 The Doepfer A-100 is a modular synthesiser. Compared to earlier modular synthesisers, it's smaller, spearheading the eurorack standard, and more stable (musicians in the 1960s and 1970s have reported their synthesisers going out of tune when the fridge kicked into action in the next room1). Even compared to its contemporary rivals, it's cheaper and has a larger range of modules, allowing it to produce a versatile range of sounds.

A brief overview of the more interesting modules

Based on the Roland TB-303's filter, this not only sounds like a TB-303 when you want it to, but as the system's modular, you can run things through it that the original TB-303 couldn't dream of, such as multiple oscillators and even chords.

Starting off life as a clone of the filter in Korg's MS-20, this has a few differences from the original. Sadly, the lowpass and highpass filters can't have independent cutoff points. On the other hand, you gain a lot of quirky features: they can have different input audio signals, although their output will be combined; and the two filters have independent volume controls, the highpass volume being bipolar. This allows the combination of the two filters to act like a bandpass or notch filter. The positive and negative clipping levels can be similarly independently adjusted. External effects can be plugged into the resonance feedback loop. Most famously, this module can self-oscillate with what the owner's manual describes as "all sorts of waveforms except sine2." If you're into twisted, mangled sounds, this is the filter to investigate.

Based on the Oberheim SEM's filter, I gather this is a favourite amongst those in the know, but it's probably overlooked by many for two main reasons: it's suspiciously cheap, and it doesn't self-oscillate. Forget any reservations you might have. It doesn't sing like a TB-303, but wow, does it growl!

While some modular fanatics may blanch at the word "digital," this provides a more flexible alternative to an analogue white noise generator. It has a variable pulse rate. Set it high and it sounds like regular white noise. Set it low and it's a weapon from an early 1980s videogame. Slowly sweep it for some interesting noises. As a bonus, you also get two inharmonious clusters of oscillators ready to be sculpted into TR-808 cymbal and cowbell sounds by your filters and attenuators.

I don't recommend this module. It abuses a digital chip, which produces only a positive voltage, no negative ones, and wasn't designed to be used to generate audio. While it technically works, the output is polarised, which can wreak havoc on your mix.

It's nice to be able to change the sample rate, but I'd recommend doing the same thing in the more analogue realm, using the A-118 analogue noise generator, A-148 or A-184 sample & hold, and A-176 CV source. They'll achieve the same effect, but with the regularly sampled and held voltage being a completely random value, rather than randomly either a single set positive value or off. While this admittedly requires more modules, as each one does less by itself, this can be a good thing, as they can also be used to do other things in other patches.

Another Korg inspired module, this one roughly emulates the resonance board of the much coveted PS-3300 synthesiser. It takes up enough rack space to make you think twice about getting it, but it adds interest to pretty much any sound by keeping the timbre subtly changing. It's basically three bandpass filters, each controlled by an independent built-in LFO (or anything else you feed into it). If you're feeling adventurous, you can even mod it to turn the filters from bandpass ones into lowpass ones. As with most of Doepfer's modules, it's gratifyingly open-ended, even in instances where there's no obvious reason for it to be. Excellent.

This is an old school delay effect using hundreds or thousands of capacitors. By adjusting the delay time (at least with the 1024 capacitor version; I can't vouch for the others), it can go from applying a strange, shimmering metal sheen to a sound, all the way down to a long echo. Changing the speed while a sound's already bouncing around in there changes its pitch as if it's some menacing machine that's firing up or shutting down. You can put anything in the feedback loop, such as a filter, for a lot of possibilities. Just about the only thing I don't like about this module is that, at lower rates, the internal clock is audible, providing a high pitched noise that's tricky to EQ out of the output if you're changing the clock rate. There's a clock output so you can wire it up to a notch filter for just this reason, but that's assuming you have one to spare. In spite of this, it's a versatile and downright fun module, and one of my favourites.

I can't really compare the Doepfer A-100 to anything else, because it's the only modular synthesiser I've ever owned. The reason I chose it above the others is because it's small, affordable, and has a rich variety of modules available. I'd much rather have twenty quirky modules than ten technically perfect ones, partly because I value versatility, and partly because quirkiness and imperfection were what I was looking for in a hardware synthesiser in the first place. As with all hardware modular synthesisers, it's monophonic and can't store patches, so it's not for everyone. For creating otherworldly music, however, I believe I made the right decision in buying it.