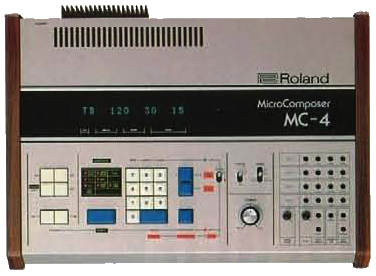 The MC-4 was a digital sequencer released by Roland in 1981. It was the successor to the MC-8.

Judging by contemporary brochures, it seems to have been designed to work with the System-100M.

As with the MC-8, you could play notes into it easily enough with the CV and gate inputs, but then editing those notes afterwards involved the cumbersome calculator-style numberpad.

Whereas the MC-8 had eight pairs of CV (for pitch) and gate outputs, and six multiplex outputs, the MC-4 had four sets of CV 1 (pitch), CV 2 (velocity), gate, and multiplex outputs. In other words, it sequences four tracks instead of eight, but with more expressivity.

With such granular control still, it's up to you what to use the outputs for. For example, you could forego one channel's velocity, and instead use its two CV outputs for a duophonic/paraphonic part that can play two separate pitches at once, shared through a single VCA.

This is likely the first machine with DIN sync built in as standard — in either direction, no less — although towards the end of the MC-8's production run, an official DIN sync output modification became available.[4] DIN sync is essentially a simplified version of tape sync, skipping the logical ANDing and modulation of the run/stop and clock signals.

They have missed off one basic function for me — the six multiplex pulses which can be routed to control any channel. We don't write rhythms and music sequences in realtime, we do it with a series of machine code style instructions.

We've done one track where the MC-4 controlled the three VCOs on the ARP 2600 for a chordal brass sound; that's worked really well. It interfaces with the ARP and the RSF module perfectly. The MC-4 is a great compositional tool, though. There's a new song called "The Meaning of Love" which, when Martin presented it, was very basic, so we worked out a bassline on the MC-4, but while they were playing along with it Martin did this little riff, so we just edited a space in the MC-4's memory and inserted it. This means that you can work out the structure of a song and get it exactly right without having to put it down on to tape, and then you don't have to mess around with tape editing at a later date.

We're using an MC-4 MicroComposer rather than the MC-8 now, mainly to play other lines which are more guitar-orientated like pitched rhythm parts. It's essentially faster, and easier to transpose and copy parts. The cassette interface is good too, and because of that it makes it possible if you want to use it live. It's four channels as against eight, which limits you to some extent, but overall it is better. Also, you can plug things in the wall elsewhere and it doesn't throw a fit — it's more stable.

LinnDrums and MC-4s gave us the completely programmable tunes and rhythms we'd always wanted in the early Human League. That was vital, because we never rehearse, we just go straight onto tape, and the tunes are also composed on tape.

If a snare drum is out of time, with a CV and gate system it's consistently out of time, and you can pull it back in line quite easily, whereas with MIDI it shifts in time, and everything does that all the time. It wasn't that I was actually worried about the timing aspect of it, but I was interested to see what difference it made.

Using the MC-4, you can't really use chords, everything had to be monophonic lines. I think also I'm a bit anti-pad. It's too easy really, if you use pad chords all the time. Also, with individual melody lines you can hear the different sounds in the lines properly.

I did sell my MC-4. They're like making tracks on a taxi meter, top. Loved the numberpad entry. The manual, as we've discussed before, is nuts. Not looked at it in years. Would like to again now I'm thinking about it, but the manual reminded me of programming assembly language at college on Nascom computers and programming the machine.