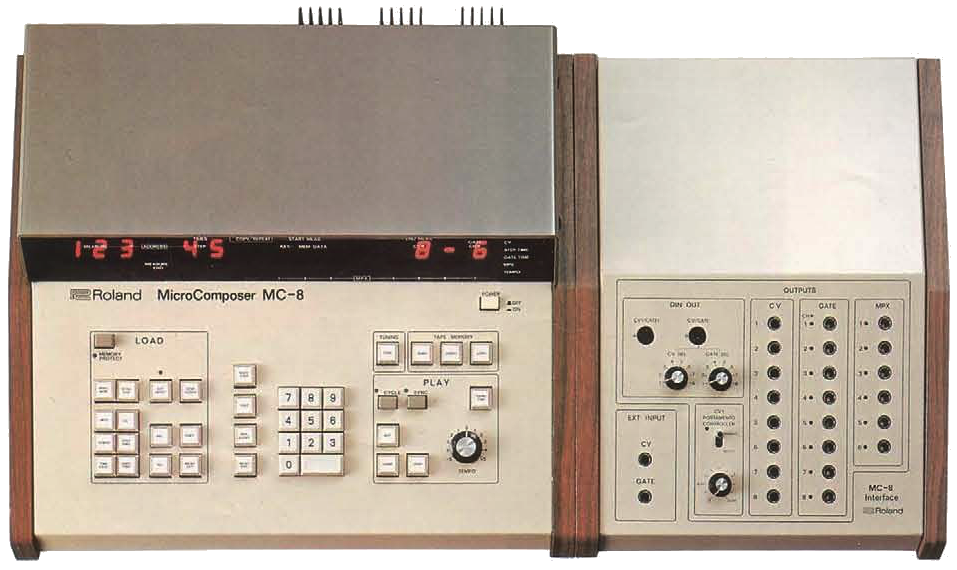 Judging by contemporary brochures, it seems to have been designed to work with the System-700.

As with the MC-4, you could play notes into it easily enough with the CV and gate inputs, but then editing those notes afterwards involved the cumbersome calculator-style numberpad.

This means you'll become intimiately familiar with how many clock ticks occur before the start and end of every note, along with which number represents which pitch.

Towards the end of its production run, Roland provided an official modification to add DIN sync out (but not in).[2]

...you can program the most intricate line — if you listen to the more brassy lines on Dare, say on "Love Action" or "Don't You Want Me", you hear some very flashy playing indeed! You can program in some very sophisticated stuff.

I learnt to read music after I bought the Roland MC-8 MicroComposer, because it then became essential for me.

I have used the Roland MC-8 MicroComposer in creating practically all the pieces on the Bermuda Triangle LP, which was perhaps the best in the world with regard to memory capacity and accuracy at that time. I now also use the Roland MC-4.

It's so good because it has so many outputs on it — it's got eight output channels and an extra six multiplex outlets which you can use for the drum machine. In fact, everything on "October Love Song" was done on the MC-8, even the drum patterns. You can control so many different things at once.

Landscape had it before us, and they had the software modified which brought it more up to date: the great thing about it is that it's got a tape sync on it, which means you can link it to almost anything — we've got it going with a TR-808 drum machine.

I got to the MC-8 through drum synthesis. It'd always fascinated me, and the MPX outputs on the MC-8 were beautifully set up for drum triggering. At the time, I had about four Simmons SDS3s all linked up in order to create the kind of sounds that we were later creating with the SDS5. That was what got me fired up.

The MC-8 used 48 ticks for a quarter beat, so a triplet is 16 and 8 ticks. But sometimes I divided an eighth note into 13 and 11 ticks so that it would give a timing swing.

My MC-8 has made an appearance on at least half of the thirty or so albums and singles I've released, the most recent being last year. Sure, it's beginning to show its age now, but until it actually packs up I'll continue to go back to it.

It was crap! We never used it on any recordings, and wasted a hell of a lot of time on it, actually. Instead, we used custom-built, very big, analogue-style sequencers with 32 steps. They were cool! I had something similar built for our drums — an 808-style concept where you could watch the LEDs going along and change the rhythm as it was playing.