Just like human beings, sounds are born, reach their prime, and die; but the life of a sound, from creation to evanescence, lasts only a few seconds.

An envelope generator usually has a gate as an input, usually to signify when each note begins and ends, along with a trigger input in case of overlapping monophonic notes, so a new one can abruptly cut off the last one. It sends a slow CV as its output (sometimes offering an inverted copy of the waveform as a bonus second output).

The simplest option is to wire the gate CV straight to the VCA, as a gate is essentially a very simple and specific type of envelope. However, as it doesn't change over time, it won't sound very interesting.

You can pass the gate signal through a slew limiter to slow it down, making it fade in, then fade out again. For anything more complex, you really need an envelope generator. 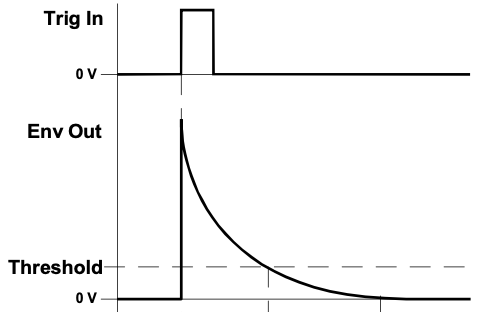 The simplest option that needs a dedicated envelope generator is probably the simple decay. You can send a trigger or gate signal to it. It doesn't matter, as it only pays attention to when the note begins, not when it finishes. You can change how long the note takes to fade back to silence (or how long it takes to sweep down a lowpass filter, or anything else you want it to control) with a knob or, if it's a voltage controlled decay, a separate CV input.

In effect, it's a slew limiter in one direction only: quick to rise, slow to fall.

Personally, I find a pair of voltage controlled decays (The Doepfer A-100's A-142 module) indispensable for good live drums. You can connect the note's velocity to the decays' CV inputs, so that louder notes take longer to fade and to lower in pitch. As simple as they are, they're about perfect for that very specific sort of expressivity.

(Sampled drums are another matter. You can make quieter notes offset the sample playback, to skip the beginning, which is the loudest part of the drum sound, to achieve a similar effect.) 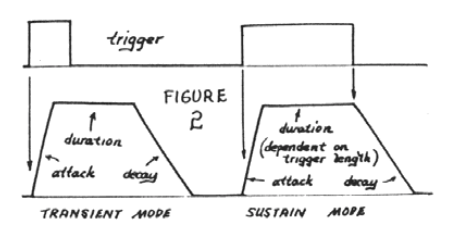 West Coast envelope generators, such as Buchla's 180 and 281 modules, and Serge's transient generator and universal slope generator, take this a step further, allowing independent control of both the attack and decay of the signal.

Some even send out a trigger voltage whenever they complete their cycle. By feeding this back into the same envelope generator's trigger input, it becomes an LFO. This is typical of the West Coast philosophy, in which one module is so versatile that it can perform double duty, in this case as an envelope generator or LFO. 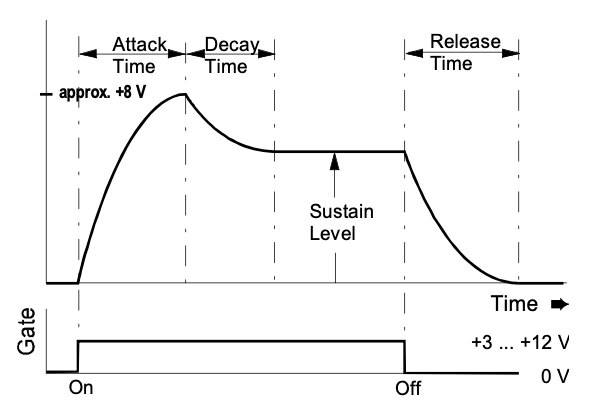 Being very much an engineer, Moog rather scientifically called these four values T1, T2, T3, and Esus. Everyone else more intuitively called them attack, decay, sustain, and release, or ADSR for short, putting them in chronological order rather than grouping them by type.

ADSR envelopes are pretty flexible, and were in the original Moog 900 Series synthesiser (module 911), so it's no wonder that they became ubiquitous. It's still worth remembering, however, that they're not the only option. 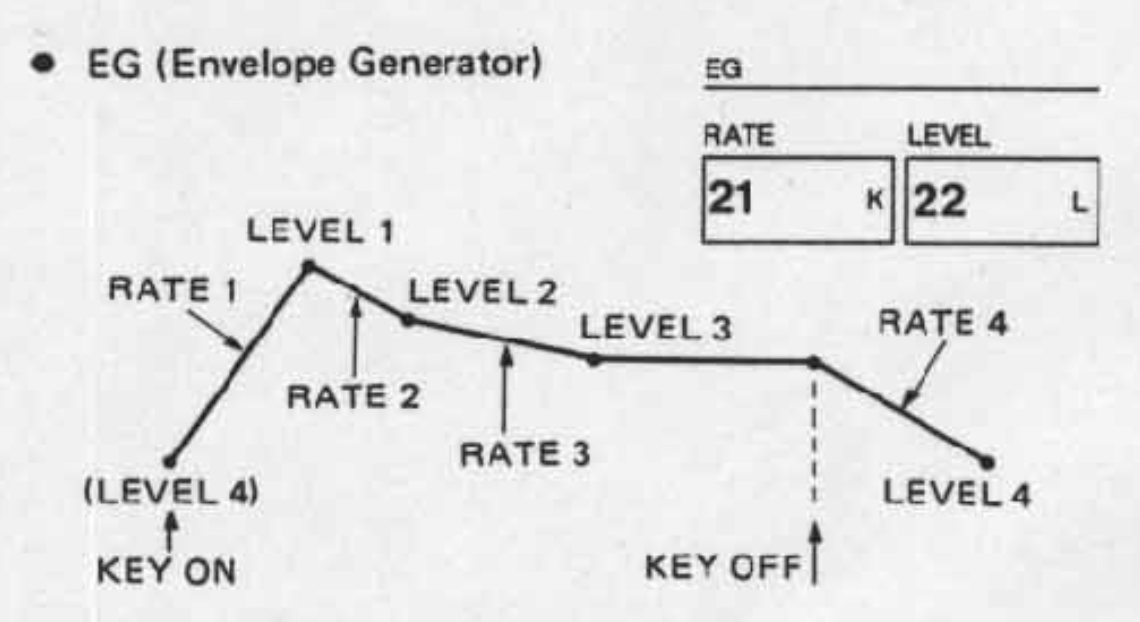 Their DX7 range had four separate rate and level settings, which allowed even more flexibility than ADSR envelopes. The increased complexity was a bit much to take in at the same time as learning FM synthesis as a whole, however, so few people took advantage of them. 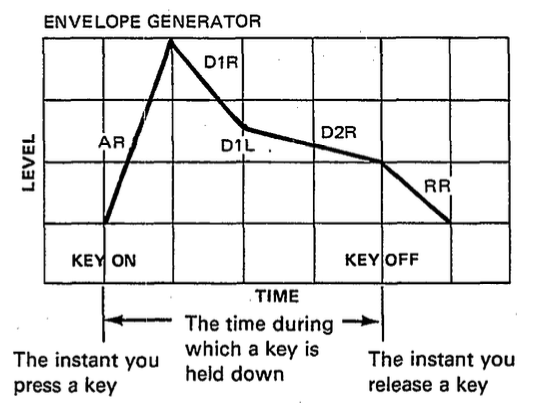 Their later DX21 and TX81Z ranges simplified the envelope generators to a good compromise: essentially ADSR, but with the addition of a rate for the sustain stage, so that even a note sustained indefinitely would eventually fade to silence. This was a better emulation of real-world physics, in which nothing lasts forever.

With a modular synthesiser, you can use things in ways they weren't necessarily intended. When people think of sequencers, for instance, they usually think of entering pitches, so each step is a separate note, but a sequencer simply outputs a regularly paced series of voltages. In other words, it's an arbitrary waveform generator. If it can loop, as most can, then it can be used as an LFO. If it can be made to play through the sequence just once per trigger, as for example the 900 Series's 960 and System-100M's 182 can, then it can be used as an envelope generator for each and every note played via another means. It ignores the note's gate length, but on the other hand, you can use the note's pitch or velocity to control its speed.