The A-Z of Analogue Synthesisers 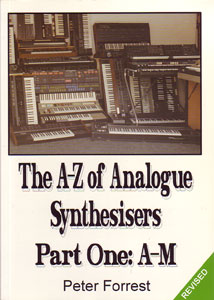 The A-Z of Analogue Synthesisers Part One

Authored by Peter Forrest, The A-Z of Analogue Synthesisers is an insightful book, cataloging early Moogs and Mellotrons all the way to modern modular systems by Doepfer and Analogue Systems. As its name implies, no digital synthesisers are covered, leaving many modern synthesisers left out. The author has instead focused on the secondhand market and the wealth of machines to be found there, from the vintage classics to obscure kits.

The guide is actually split up into two books, one covering companies whose name starts with an A-M, the other covering N-Z, and both weigh in at well over three hundred pages. The revised and expanded 1998 edition that I was lucky enough to get my hands on is limited to 6,000 copies, all numbered, in fitting with the collector's mindset that most of its readers doubtlessly have.

There are two main uses for this encyclopedia. The first is practical: you can look up almost any synthesiser that you see in a classified advert, and find out how good it is, its technical specifications, and its secondhand value. The second use for this book is probably the reason most of its readers got it in the first place: to encourage you to pine for classic synthesisers. With all its anecdotes, trivia, and pictures, it succeeds at this very well.

The author has gone to great efforts to include a wealth of information about every analogue synthesiser you're likely to have heard of, and many you haven't. Take, for example, the Roland TB-303. He is not content merely to include a list of famous artists who have used it (occasionally going as far as to divulge how many they own or which songs they've used them in), or even recommend modifications available for it. He even goes to the trouble of including a photocopy of an old advert from a shop selling them brand new for £89 each, a fraction of both their £285 RRP and their £480-£650 current value, so you can be annoyed at yourself for not having hindsight twenty years ago. 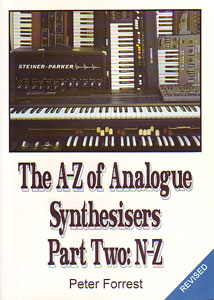 At the other end of the spectrum, he includes obscure yet valuable oddities such as the Studio Electronics MIDIMoog, which is made out of a Minimoog that the company has taken apart, rackmounted, and given MIDI. He covers pretty much everything analogue, from cheap, modern TB-303 clones that only produce one kind of sound and don't do it very well, to organs and electric pianos. Just about the only thing he hasn't included, besides digital synthesisers, is drum machines. Hopefully he will cover these in a companion encyclopedia.

All in all, these books are something which will appeal to anyone interested in synthesisers. It's packed full of anecdotes and trivia that can't be found online and makes a good present for any synthesiser geek. (Significant others, take note!) I'd definitely recommend it to anyone who purchases old synthesisers on the secondhand market, so you know which prices are fair and what to expect from the instrument itself. Your only problem may be finding a copy.