I only figured out I'm autistic in 2022. I'm still learning. Writing these articles is how I learn things. They're all works in progress, to various extents. No-one can speak for an entire minority group. These are just my personal experiences, things I've found out from talking to my friends, and discussions I've seen on autistic forums. Please don't take me as authoritative. I'm not. 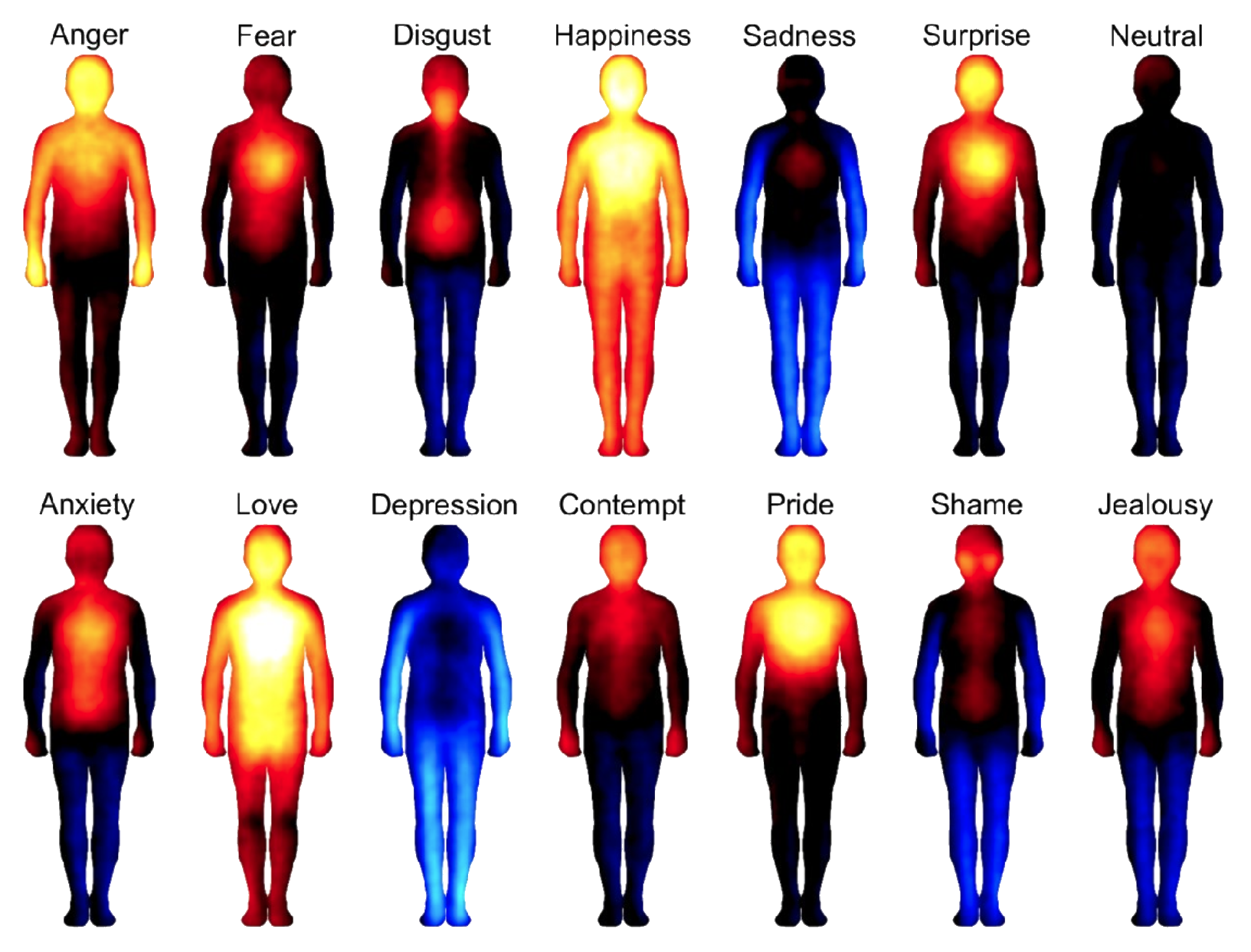 Bodily topography of emotions. This is utterly alien to me.

Something happens and I'm head over heels

Cognitive alexithymia is an issue with discerning which emotions you feel. (These maps might help.) I have no lived experience of that one.

Affective alexithymia is the inability, or greatly reduced ability, to viscerally feel emotions in the first place. That's the one I can tell you about. (These maps are gibberish to me.) Perhaps it should be renamed to something like visceral hyposensitivity, for accuracy and symmetry.

I have emotions, but I don't feel them as if they're happening to my body. I still react to them physiologically, and can infer from that what I must be "feeling". This is similar (and possibly even related)[1] to how I infer I'm hungry, due to my interoceptive hyposensitivity. Perhaps it is most accurate to say that I experience emotions unconsciously.

For example, I don't listen to depressing music anymore, because I don't want to be depressed. I can describe depression as not wanting to do anything, feeling that nothing matters so there's no point to anything, and not especially wanting to go on. I don't like how that feels, but as with all emotions, I don't literally feel it in my body.

Conversely, listening to upbeat music I like makes me want to bop along with it, which I can similarly infer means that it makes me happy. Ambient music can calm me down. But again, I don't feel these emotions in my body. Music never gives me chills.

I can read someone's hate speech against a minority group I'm in (and look forward to the day it's no longer uncritically published in national newspapers), notice that I'm stimming, and realise that I should stop reading it as it's clearly making me very uncomfortable. I just don't feel uncomfortable. I have to infer it, even if I'm having such an extreme emotional response that it's making me stim. This might explain why people commended my "patience" trying to educate bigots. Thankfully, I've since learned to stop reading such things, for the sake of my mental health.

When I think about leaving the house, my anxiety makes me use the bathroom more due to my fight-or-flight response, but again, that's not a feeling, it's an observation. The closest I get to feeling an emotion is getting a very specific not-quite-headache when I cry.

When I see a cute creature, I involuntarily smile. This isn't part of my masking. I have no poker face. When I watch good comedy, I involuntarily laugh and, if it's good enough, even sweat. These are pleasant "feelings", and I really should seek them out more often. I just don't feel them in my body. I can tell what emotion I'm experiencing the same way you can tell which emotion I'm experiencing, by looking at my involuntary actions. I can feel myself smiling or laughing, and as they say, it's good to laugh. 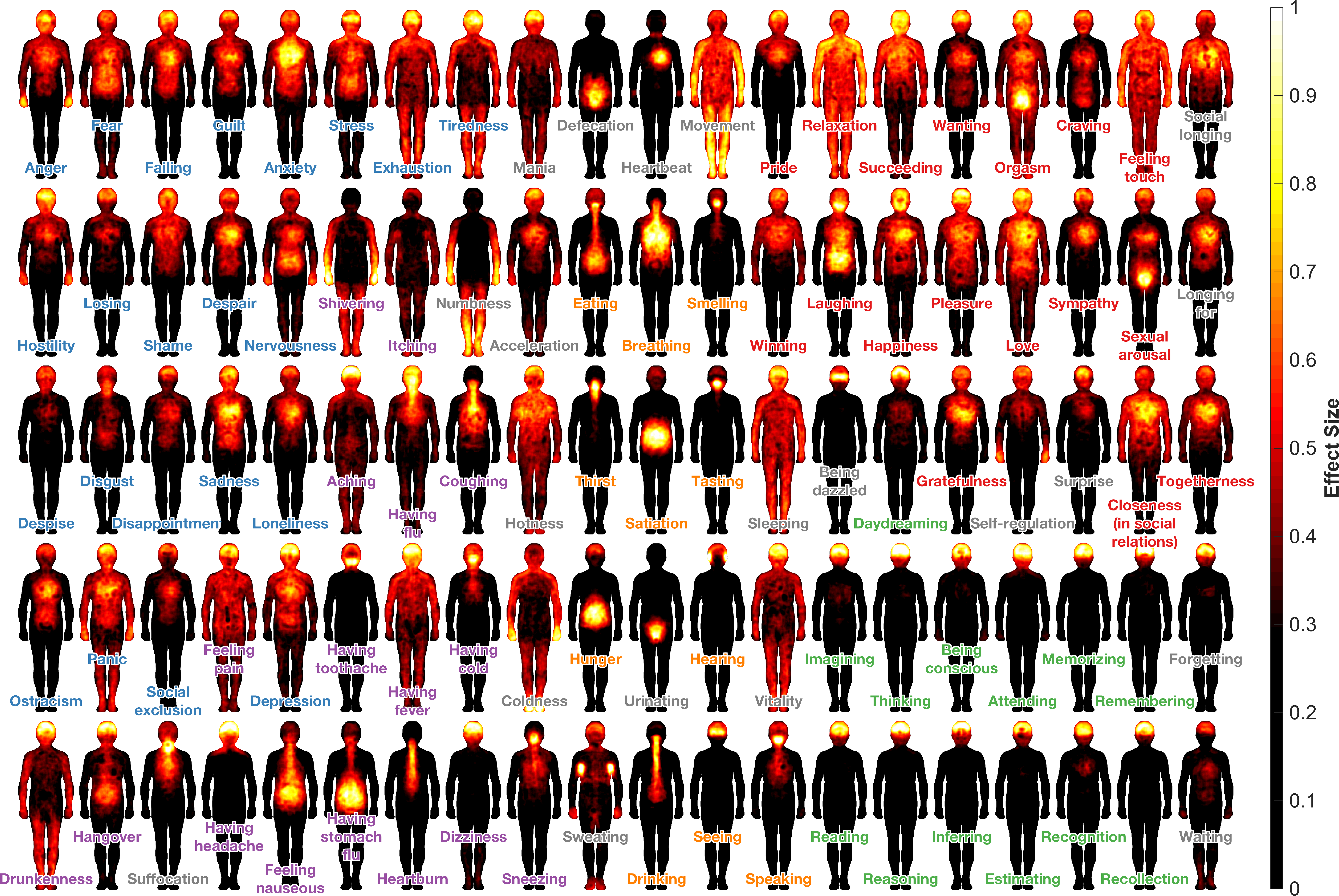 Maps of subjective feelings. Almost all of this looks bizarre to me.

In stark contrast, when most people talk about their feelings as if they're happening to their body, this is apparently a rare occasion on which they're not speaking metaphorically.[2][3][4] Even the word feelings was, in hindsight, a subtle clue that they're literally felt. Similarly, when people talk about feeling something viscerally, they're talking about literally feeling it in their viscera — their internal organs.

Shockingly, some — perhaps even most — people might be able to literally feel emotions as some or all of the following:

Some people might even see red when angry or feel blue when depressed, perhaps suggesting a mild emotional-visual synaesthesia.

I always assumed people used to think the heart generated emotions because they could feel it pumping faster when they're excited. Perhaps there's more to it than that, and it does feel to a lot of people like their heart is where they feel things like love. No wonder it's the symbol for love.

Alas, my weekend spent researching alexithymia online didn't yield many conclusions. I'm not entirely sure if what I experience counts as that or not. But terminology isn't the point. If this is how you perceive your emotions, I'd like to reassure you that you're not alone.