Not to be confused with a computer program.

A program is a place in a synthesiser's memory that stores all its switch and slider positions. Loading a different program allows you to play a different sound.

In a monophonic synthesiser, the keyboard, along with the switches and sliders, are directly connected to the voice circuit. If you want to remember how to get it to make that particular sound, you have to take a photo of their positions, or draw them on a diagram of the synth known as a patch sheet or settings sheet. 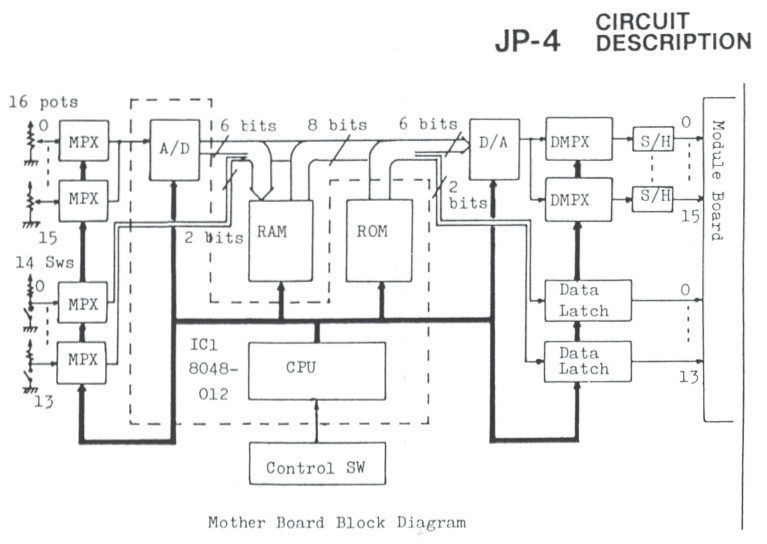 In a polyphonic synthesiser, a microprocessor sits between the single interface and the multiple voice circuits, allowing it to relay the information to its multiple destinations. So the switch and slider positions are digitised (turned into numbers) and back again, before being relayed to the voice boards.

As these settings are being digitised anyway, the synthesiser designers figured they might as well go a step further: the microprocessor can store these numbers, and later retrieve them. This allows the synth to save and load your patches, now called programs. The ROM can even store programs made by the people who built the synthesiser, called presets.

This not only gives sound designers some starting points, but also allows more casual electronic musicians to forego sound design entirely, and focus on actually playing the instrument. As with digital step sequencing, storing values in non-volatile memory is a far better solution than drawing the switch and slider positions.

The Prophet-5 and Jupiter-4 did exactly this, and it's not a coincidence that they introduced both polyphony and memory. When you have a microprocessor, you might as well take full advantage of that fact by making it provide both.

Shortly after the concept of storable programs was introduced, MIDI was created. Along with all its other advantages, MIDI allows a controller to remotely change a synthesiser's program, changing its sound. A MIDI sequencer can even remember the program change itself, changing the sound mid-song if required.

There are sounds which can completely bring out the most in a song. I've got basslines that only sound right with particular sounds. I can actually hate a song because the sounds aren't right. I just can't take a sound for what it is in itself. And I will never use a preset. That is against the law where I come from.