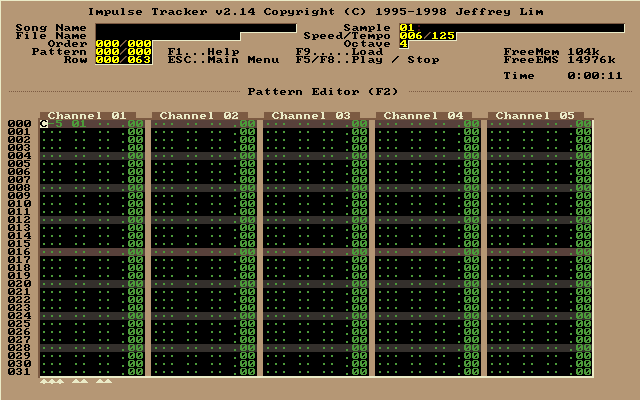 Impulse Tracker was a DOS tracker, made by Jeffrey Lim between 1995 and 1998.

Designed as an improvement on Scream Tracker 3, it adds 16-bit sampling, and instruments (like Akai's programs), grouping samples together and manipulating them with envelopes and a lowpass filter.

Rather surprisingly for a tracker, it has MIDI in and out. You can enter notes via a controller keyboard, and also use it to trigger notes on external hardware. In effect, it doubles up as a quantised-only MIDI sequencer.

On a personal note, it didn't take long for my friend Alex to convince me to join him in switching over from Scream Tracker 3 to Impulse Tracker. The music we made sounded much more professional with 16-bit samples, and this one application alone (along with, say, a versatile monophonic synthesiser and an application that can record it) is sufficient to make several albums' worth of music in... which is exactly what we did. Its gold and green matrix is permanently etched in my memory.